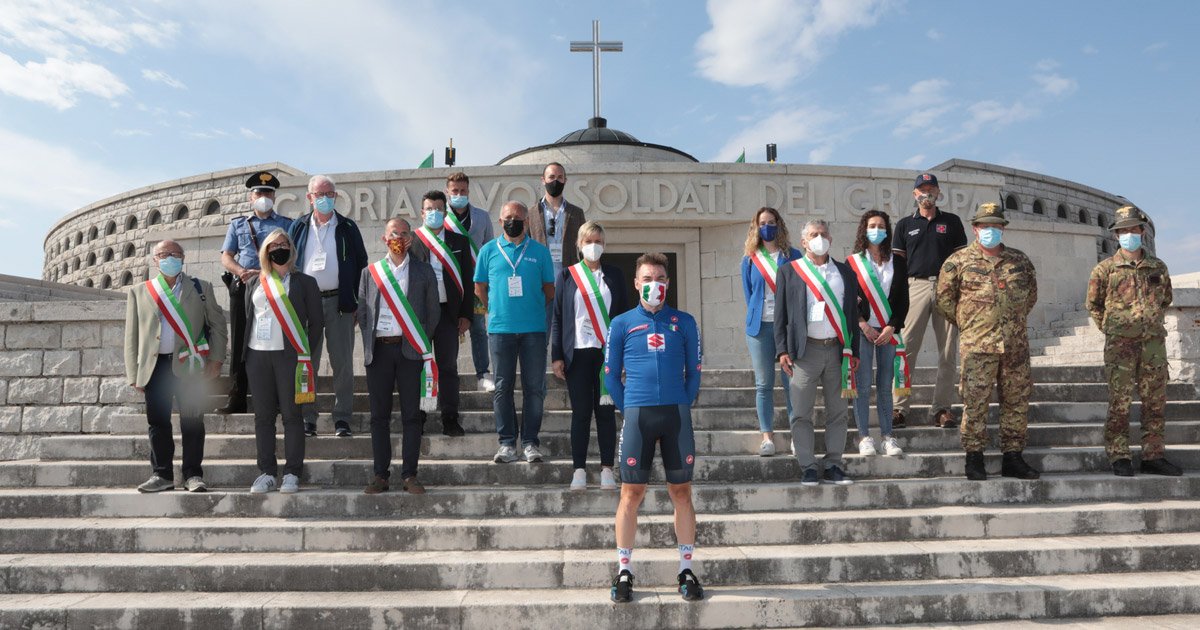 The second stage of the AIR2022 will take place on Sunday 5th June all in the Veneto area: departure from Castelfranco Veneto and conclusion atop Monte Grappa where in 2021 Lorenzo Fortunato was the winner

The Adriatica Ionica Race 2022 will return to climb the summit of Monte Grappa where last year there was a great show in a stage that rewarded the crystalline talent of the Bolognese Lorenzo Fortunato.

“After the success of this milestone last year, we wanted to re-propose the finish line atop what for all fans of two wheels is a mythical peak. I can already anticipate that this year we will climb from a different side than last year for allowing those who love cycling to discover a new route full of beauty and history” explained Moreno Argentin.

The stage leading the AIR 2022 caravan to the top of Monte Grappa will take place on Sunday 5th June: leaving from Castelfranco Veneto (TV), it will involve an area rich in history and tradition, deeply connected to two wheels.

CASTELFRANCO VENETO, THE LAND OF CHAMPIONS – The start of the second stage of the Adriatica Ionica Race will be in the heart of Castelfranco Veneto (Tv): the city, famous for being Giorgione’s birthplace, is today one of the most prestigious reference points for world of two wheels. Here was born and still lives Varese 2008 World Champion, Alessandro Ballan and here is the headquarters of one of the historical teams of the Italian youth sector, the Zalf Euromobil Fior which in 40 years of activity has promoted more than 120 athletes to professionalism, winning 30 Tricolor jerseys, 2 European titles and 8 World titles.
It is the whole territory of Castellana that infuses passion for cycling, as confirmed by the Mayor of Castelfranco Veneto, as well as the President of the Province of Treviso, Stefano Marcon: “Our city is lucky to be in a territory that, thanks to its configuration and to the passion of the people, it can be really considered the homeland of cycling. We are pleased to host the start of the Venetian leg of the Adriatica Ionica Race: a race having a format able to go further the simple technical-competitive aspect and capable of communicating an important message of sustainable mobility which represents a great opportunity for the future of the entire territory of the Province of Treviso “. The comment of the Councilor for Sport and Organizations, Franco Pivotti, was also positive, underlining the importance of the bond with Monte Grappa which will be celebrated on June 5th: “Monte Grappa for all our people represents a piece of history in which our ancestors were protagonists with their own lives. I am sure that this day of sport will also be an opportunity to celebrate the memory of those days and to offer a unique showcase to promote the top spots of our territory “.

MONTE GRAPPA: A MONUMENT OF HISTORY AND NATURE – Monte Grappa, it not only represents the ideal terrain for those who love to test themselves by bicycle, but also on September 15th – after a 4-year territorial animation activity – it was officially nominated MAB UNESCO Biosphere Reserve. The arrival of the Adriatica Ionica Race contributed to reach this aim, thanks to the showcase offered by its arrival.  A recognition that has set off the uniqueness of Monte Grappa as an authentic model of sustainable development implemented through conservation measures for ecosystems and biological and cultural diversity.

“On weekends, Monte Grappa is always a popular destination for hikers and mountain enthusiasts: we are sure that many of them will also take the opportunity of attending the arrival of the athletes, enjoying a day surrounded by the nature and the mountains. I want to thank Moreno Argentin for giving us again the same opportunity, repeating the experience had in 2021. I am sure that our roads will be crucial for the final success of this edition, as well as it was last year. We have planned together the route which is supposed to highlight the foothills leading to Monte Grappa” added Michele Cortesia, Councilor for the Financial Dept. of the Municipality of Cavaso del Tomba and Delegate of IPA Terre d’Asolo and Monte Grappa.

One thing is certain, about the forthcoming June 5th: it will be a real battle between those who long for final success to conquer the finish line located again at the altitude of 1,712 meters atop Cima Grappa.

“Monte Grappa is one of the most iconic climbs in our country and it’s a great honor for us having again the opportunity of including it within the track of our race. Who wins this stage will for sure be an athlete of undeniable talent: it will be an important testing ground for everyone and an opportunity to show to the world the beauty and uniqueness of our  territory, perfectly suitable to host and give strong emotions to those who love cycling” concluded Moreno Argentin.