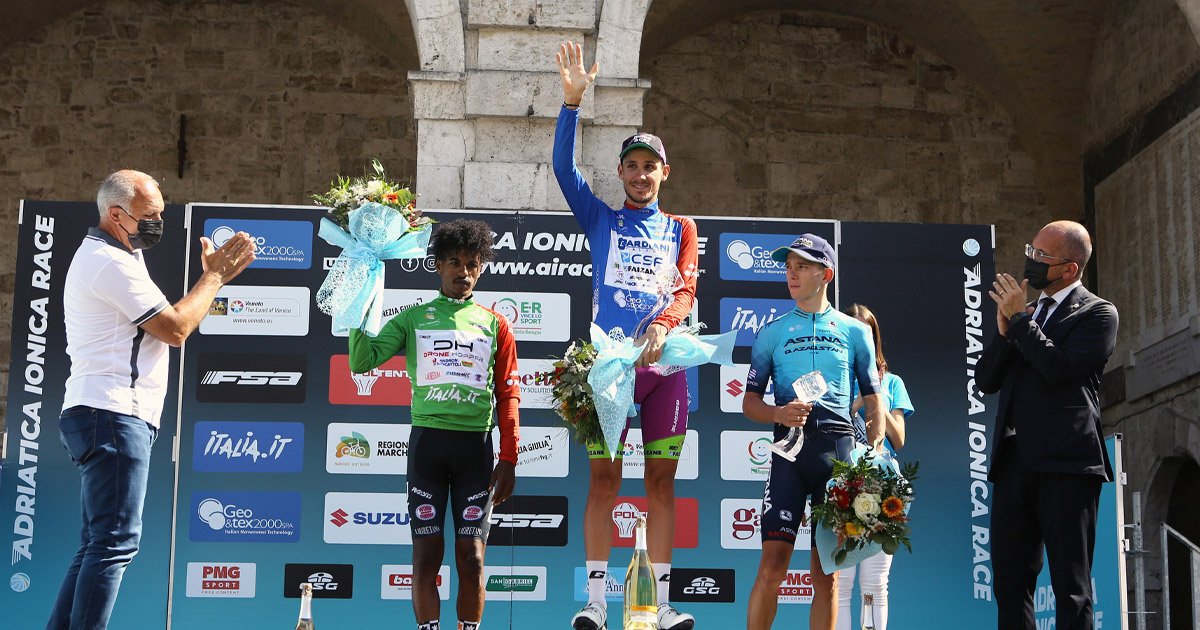 At the end of the 800 kilometers scheduled, the 23-year-old from Vicenza of Bardiani CSF prevails; the last stage rewards Scaroni’s second victory

The 2022 edition of Adriatica Ionica Race has just ended with the utmost satisfaction for Moreno Argentin and all his staff who has been able to give life to a spectacular as well as exciting competition thanks to a format focused on enhancing the territories crossed and the attractions they can offer. Five days of competition, through Friuli Venezia Giulia, Veneto, Emilia Romagna and Marche have decreed the final success of Filippo Zana (Bardiani CSF Faizanè), the 23-year-old from Piovene Rocchette (Vicenza).

The fifth and last stage of today from Castelraimondo (Mc) to Ascoli Piceno rewarded the sprint of Christian Scaroni (Italy) who thus collected the second success in this edition of Adriatica Ionica Race.

THE RACE REPORT – 102 athletes started from Castelraimondo to complete the 152 km with the arrival set in Ascoli Piceno. After about twenty kilometers, the breakaway made up of 13 riders with a majority presence of Eolo- Kometa, changed the situation.
The action of the day is made by: Alessandro Fancellu, Alex Martin Gutierrez and Diego Pablo Lopez (Eolo Kometa), Manuele Boaro (Astana), Veljko Stojnic (Corratec), Edoardo Zardini (Drone Hopper), Raul Garcia Pierna, Diego Lopez Fuentes and Pau Miquel Delgado (Kern Pharma), Mikel Iturria (Euskaltel Euskadi), Christian Scaroni (Italy), Haylu Abreha Negasi (Qhubeka) and Paul Wright (Mg K Vis).
A large number of riders allows regular changes and, consequently, a high speed able to gain a good margin on the group, an advantage that is however reduced in the final. But it is too late, the 13 in advance will be at stake for success. In the last 8 kilometers, there are attacks and counterattacks, but the balance does not break. In the sprint it is Christian Scaroni who raises his arms for the second time in five days, while Filippo Zana celebrates his victory in the general classification.

THE STATEMENTS – “Mine is a story to be told. I won two stages out of five at the Adriatica Ionica Race without having a contract. Today I made the breakaway, I did a good sprint, I played my cards at my best. I am happy ” declared the winner of the last stage of the AIR Christian Scaroni (Italian National Team) happy and satisfied. ” It is difficult to arrive prepared when you do not have a team behind you, especially because it is a mental factor rather than a physical one. I bet on this race, I had high ambitions and I won. It saddens me not to have a contract, but now I think about enjoying this stage victory “.

“I dedicate this victory to my team which was truly phenomenal” declared satisfied the winner of the fourth edition of the Adriatica Ionica Race, Filippo Zana (Bardiani CSF Faizanè)“. We entered the breakaway of the day in a controlled way, we stayed away from problems and crashes and we all arrived together. This victory rewards me for the sacrifices made and this feeling is wonderful. Now I will run at my best for a good second part of the season because here at AIR I found the strength in my legs as it was last year ” concluded the winner of the AIR 2022.

WINNERS:
The AIR 2022 gave Christian Scaroni (Italian national team) his first two victories as a professional: after the opening stage, he’s protagonist again with today’s encore. The 24-year-old from Brescia runs with Gazprom- Rusvelo, a team suspended by the UCI due to the war in Ukraine. In 2021 Scaroni had finished thirteenth in the Giro dell’Emilia and was second in the general classification of the Tour du Jura. Among the Juniors he had been Italian road champion.

Filippo Zana, 23 years old, from Piovene Rocchette (Vicenza) of Bardiani CSF Faizanè conquered the final classification of the Adriatica Ionica Race. Crystalline talent, endowed with an excellent pace in climb course, Zana has collected important successes since the youth categories: among the Under 23s he won in 2019 in the classic Gp of Capodarco and in 2021 he conquered the final classification of the Corsa della Pace, a stage rage valid for the Nations Cup, which is held in the Czech Republic. Among the professionals, with the Bardiani CSF Faizanè jersey in 2021 he obtained the victory in the final classification of the Sazka Tour. Despite his young age, he already has three participations in the Giro d’Italia (2020, 2021 and 2022) where in 2021 he conquered a seventh place in the 18th stage with arrival in Stradella.

CURIOSITY: THE DISH OF THE DAY – The chef Enrico Mazzaroni of the “Il Tiglio” Restaurant in Monte Monaco presented three typical dishes of the tradition of Marche Region, enhancing the products of the earth and revisiting them in a completely innovative way.
The first proposal is “Parmesan ball with mashed potatoes”, made using the” biancona ” potato, characteristic of Ascoli.
The second proposal is “Spaghetti with butter and anchovies from S. Benedetto del Tronto with passion fruit and blown lentils from Castelluccio”: a harmony of flavors and colors.
Finally, to satisfy even the most gluttonous palates, “Chocolate cake” made with a layer of gianduia chocolate and one of 75% dark chocolate that go well with a steamed base. 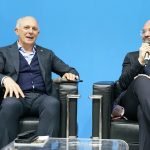