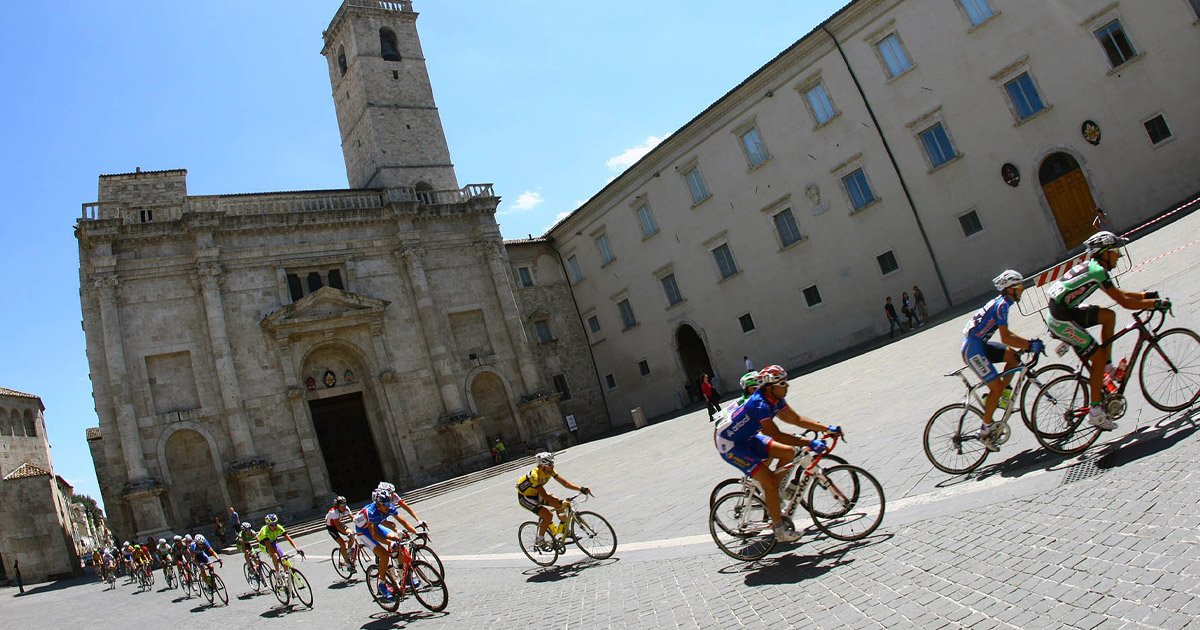 AIR2022: everything will be decided between Castelraimondo and Ascoli Piceno!

The fifth and final stage of the AIR 2022 will also take place in the Marche region on June 8th, final finish line in the city of travertine

From Tarvisio to Ascoli Piceno, 700 kilometers separate the city that will host the start of the Adriatica Ionica Race 2022 and the one that will be the final approach for the caravan led by the world champion Moreno Argentin.

From 4th to 8th June 2022 the fourth edition of the race that runs along the routes of the Serenissima will be staged and, on Wednesday 8th June, the fifth and last stage will be held with an official start in Castelraimondo (Mc) and the arrival in Ascoli Piceno.

The splendid medieval village of Castelraimondo, dominated by the Cassero, the 38.3-meter-high watchtower erected between 1311 and 1318 will therefore launch the decisive challenge for the final success.

“A second stage in the Marche region will complete our program during 2022 allowing us to also discover the hinterland of this splendid region” observed Moreno Argentin who, even for the last day of the race, has designed a track which is spectacular as well as insidious. “I want to thank the Regional Councilor Guido Castelli for having provided location for our initiative and supported in the choice of the most suitable territories to be the theater for the passage of the athletes making up our group. Also, during this fifth stage we will cross many villages, towns and cities that deserve to be known and valued. It will be an intense race finale that will surely excite and give great emotions to the public “.

The city of travertine will therefore follow Trieste (2018 and 2019) and Comacchio (2021) which in the past have crowned the talent of Ivan Ramiro Sosa, Mark Padun and Lorenzo Fortunato.

Those aiming for the final success in 2022, therefore, will have to present themselves at the start of Castelraimondo (Mc) with the necessary energy and the credentials to tame the race to the finish line in Ascoli Piceno where there will be the possibility to enter their name in the prestigious roll of honor of the event which this year boasts the patronage and support of the regions of Friuli Venezia Giulia, Veneto, Emilia Romagna and Marche.

“I had the honor and pleasure of being the Mayor of Ascoli Piceno for 10 years and I am happy that Moreno Argentin has decided to set the final arrival of AIR 2022 here, in one of the most monumental cities in Italy. It is not a casual choice, but a decision that goes well with the spirit of sporting and tourist promotion of the territories crossed by the race”, observed the Regional Councilor for the budget, Guido Castelli. “The Marche Region will play a leading role in the Adriatic Ionica Race 2022 program by hosting the last two stages and offering the world some very suggestive postcards able to fully highlight the tourist, cultural, artistic and landscape aspects that our territory represents”.

The first details of the two stages of the Adriatica Ionica Race in the Marche region will be unveiled on Monday at BIT, the reference fair in Italy dedicated to the universe of tourism to be held at Fiera Milano. Moreno Argentin together with the Regional Councilor Guido Castelli will intervene within the space dedicated to the Marche Region to officially launch the two days of competition that will close the AIR 2022.