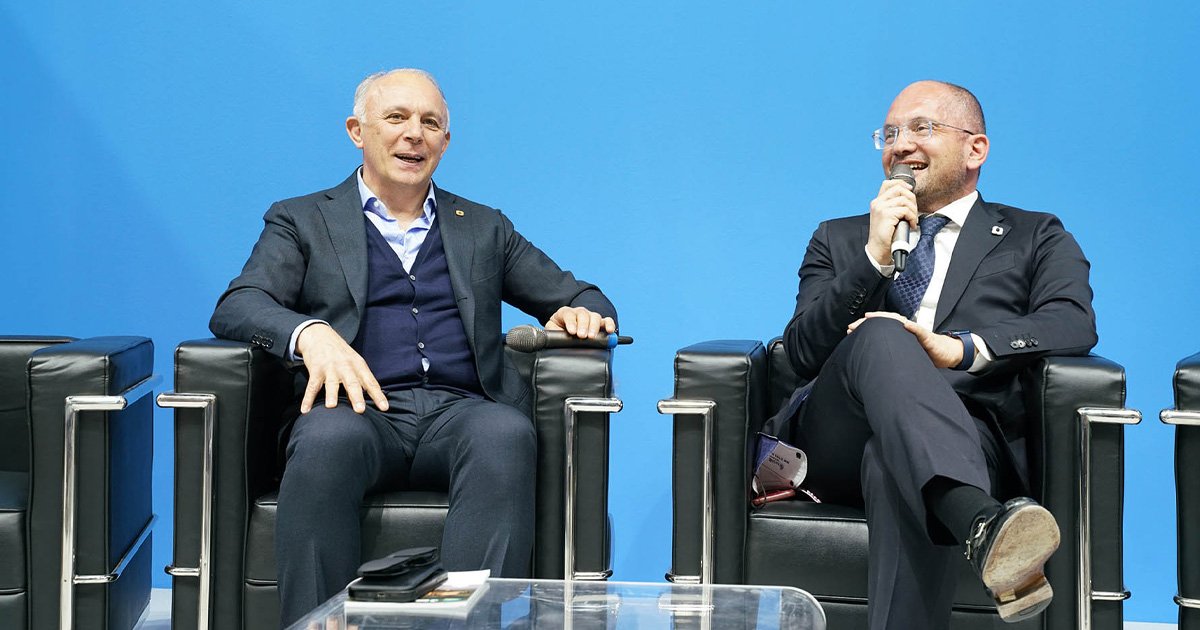 Moreno Argentin was a guest of the BIT in Milan to present and promote the tourism and food and wine project linked to the stage race scheduled from the forthcoming 4th to 8th June.

The Adriatica Ionica Race presented today, at the Marche Region pavilion, within the Fiera Milano City, in the context of the BIT, the fair dedicated to tourism operators, the tourism and food and wine promotion project linked to the stage race that will be staged from Tarvisio to Ascoli Piceno from the forthcoming 4th to 8th June.

Born in 2018 from an idea of Moreno Argentin, the Adriatica Ionica Race immediately distinguished itself within the UCI calendar not only for its technical characteristics but above all for its vocation to highlight and promote the territories crossed by the two-wheel champions from a tourist point of view.

The fourth edition of the AIR, which will be staged in less than two months, will further develop this aspect proposing some ideas dedicated to the food and wine of Friuli-Venezia Giulia, Veneto, Emilia-Romagna and Marche as anticipated today by Moreno Argentin: “I’m honored and pleased to be a guest in this context to present some of the details characterizing the 2022 edition of our race. The format we have built over the years has always had a special consideration for the tourism world because it starts from awareness that we live in an extraordinary Country in which every town has historical, artistic, landscape and cultural valuable aspects that deserve to be told and presented to the international public. For this reason, we have always considered the cycling race as an instrument of real promotion of the territory crossed: a job that was appreciated not only by the regional and local administrations involved in our event, but also and increasingly by cycling enthusiasts from all over the world. For the fourth edition we also wanted to launch an initiative dedicated to another Italian hot spot: the world of food and wine. That’s why, at each stage we will propose a typical regional dish and we will promote it through the presence not only of the media dealing with cycling, but also of those who focus their attention to the world of food”.

At the Pavilion of the Marche Region the Councilor for the Budget, Guido Castelli did the honors: “We strongly believe in the event proposed by Moreno Argentin and we are happy to be part of this year edition with two stages that are expected to be decisive as well as spectacular. Cycling is an incredible promotional flywheel for our Region which is particularly suited for this sport: events such as the Adriatica Ionica Race allow us to highlight all the attractions of the Marche region from the sea to the hinterland. For two days we will have the big names of the cycling world along our roads and the images of the locations crossed by our race will be worldwide spread thanks to the television activity following the riders. It will be a very precious spot for the whole Marche Region which, combined with the food and wine initiative promoted this year for the first time, will ensure great visibility for the attractions of our territory”.

Tarvisio, Monfalcone, Castelfranco Veneto, Cima Grappa, Ferrara, Brisighella, Fano, the Conero Riviera, Castelraimondo and Ascoli Piceno await the arrival of the Adriatica Ionica Race: a caravan that will be able to give entertainment, feast and the promotion of local hot spots.