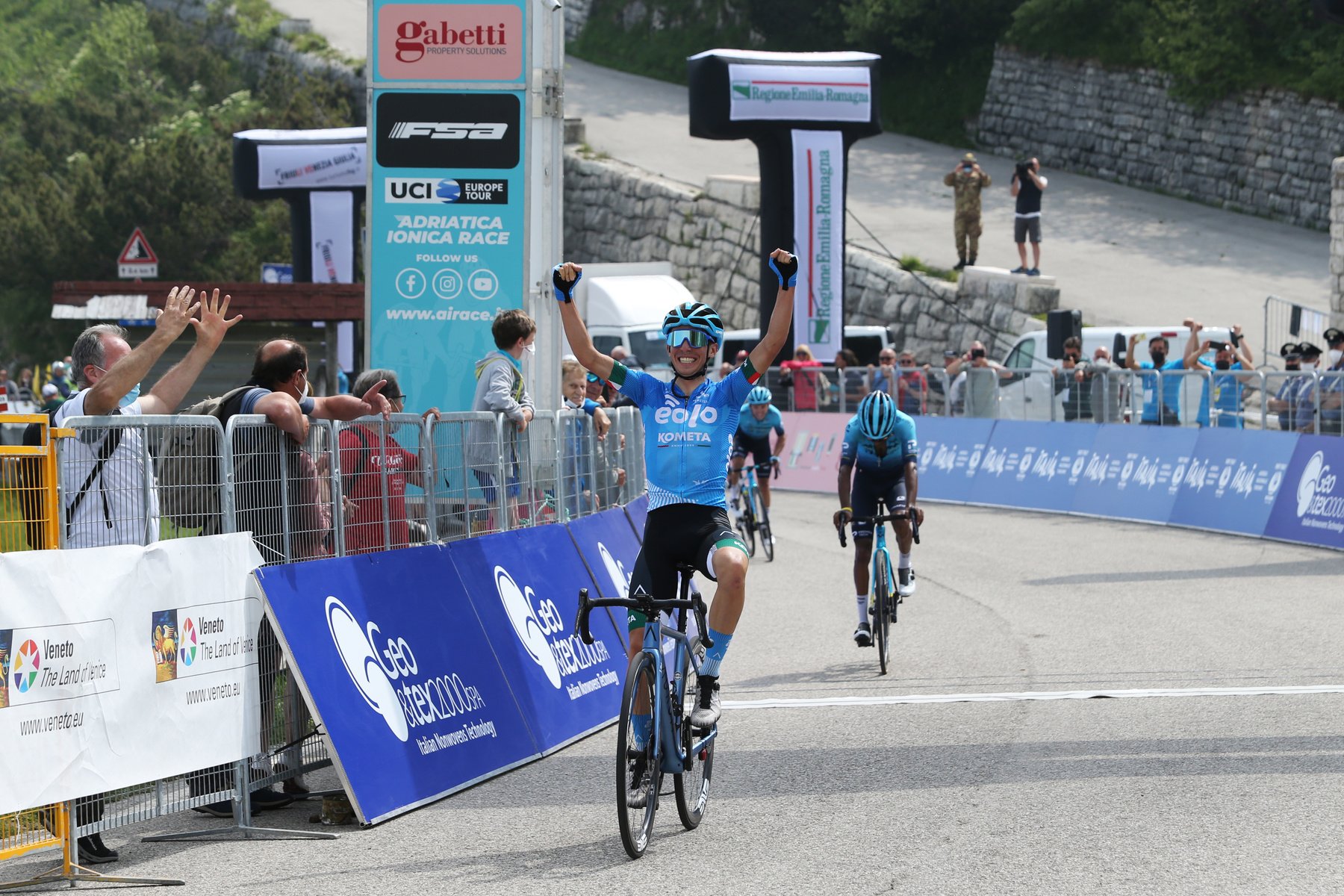 Today’s second stage of Adriatica Ionica Race, the stage race conceived and promoted by Moreno Argentin, with the support of Friuli Venezia Giulia, Veneto and Emilia Romagna, together with ENIT – Italian Tourism Agency, on the Serenissima routes, on the famous and icon summit finish atop Cima Grappa, has crowned Lorenzo Fortunato (EOLO – Kometa).
The Bolognese, aged 25, further confirmed to be one of the stronger emerging grimpeur on the international scene. Lorenzo Fortunato’s success was reached at summit finish atop Cima Grappa ( 1,712 meters high), where EOLO (internet provider of AIR 2021) was able to supply for the first time a local connection at high speed to the Headquarter of the organisation and press office, hosted at Rifugio Bassano.

NEWS – Few kilometres after the start, after the stretch of Ca’ del Poggio, six riders emerged: Mattia Bais (Androni Giocattoli), Ricardo Tosin (General Store), Riccardo Verza (Zalf Euromobil Fior), Luca Rastelli (Colpack – Ballan), Francesco Zandri (Work Service) and Andrea Debiasi (CTF).
Francesco Zandri (Work Service) crossed first the line of the GPM in Combai. Later, the six fugitives reached a maximum advantage of four minutes.
The athletes of Gazprom-Rusvelo and Androni Giocattoli led the chase, reducing the gap and reabsorbing the head of the race before the beginning of the final climb.
Under the driving force of Gazprom – Rusvelo the main group is reduced to 25 riders. In the last ten kilometres, the Kazakh Vadim Pronsky tried to reduce the distance solo, well protected by his teammate Kudus Merhavi.
Final unexpected action occurred just in the last one thousand metres of the stage, when an epic Lorenzo Fortunato (Eolo – Kometa), at first covered the distance and finally overcame the Astana Premier Tech’s couple at the final sprint. Merhavi and his teammate Pronsky, finished second and third, respectively.
This success allowed Lorenzo Fortunato to conquer the general classification leader blue jersey branded Geo&Tex2000, with an advantage of five seconds on Kudus and nine seconds on Pronsky. A record he needs to preserve tomorrow during the third and last stage of the race from Ferrara to Comacchio.

INTERVIEWS – Enthusiastic after the finish, Lorenzo Fortunato took the podium with a wide smile on his face:” I knew I was fine and I waited for the last kilometre to spend all I had. Pronsky and Kudus were in front of me: I took them as point of reference and I was able to overcome them in the finale. I am happy to wear the leader jersey and I will do all my best to preserve of the dirt road stage, taking place tomorrow near my hometown. Fighting among the people I know it will be great and I will try to conquer the stage. My target is doing my best at the forthcoming Italian Championship in Imola” – declared the winner.
Also Renato Campana, owner of Geo&Tex2000 clapped his hands to the protagonists of the Adriatica Ionica Race:” I am sorry for the Astana Premier Tech athletes who led the climb stage, but who had to bow down before the youthfulness of Lorenzo Fortunato. I want to congratulate Moreno Argentin, the organisation, all the athletes, who gave their best even on this demanding stage. This race has always gave great emotion, we are honoured to be a partner of this important event and we will do the same in the future.
At the end of today’s stage the mayors of the Pedemontana area, coordinated by Annalisa Rampin, President of IPA Terre d’Asolo and Monte Grappa, together with the flag-bearer for the Italian National Team at the forthcoming Olympics Elia Viviani, paid homage to fallen, laying a Laurel crown on Memorial Monument of Monte Grappa. “Today on Cima Grappa we have attended a great sport event, which has highlighted the features of our beautiful territory. This stage, thanks to the high visibility granted to our territory, has given the definitive driving force to insert Monte Grappa as Unesco Biosphere Reserve. This presentation as a candidate should be in the last phases and it is supposed to be a great recognition to further promote the natural, historical and artistic beauties of our municipalities” – ended Annalisa Rampin.

THE WINNER
Lorenzo Fortunato, aged 25, from Bologna, is a young climber who emerged since the youth categories. He made his debut among professional riders in 2019 wearing the Neri Sottoli Selle Italia KTM jersey.
On 22nd May this year he conquered his first success among the professionals, winning the Stage 14 Cittadella – Monte Zoncolan. Today’s victory is a confirmation of his great qualities as grimpeur.