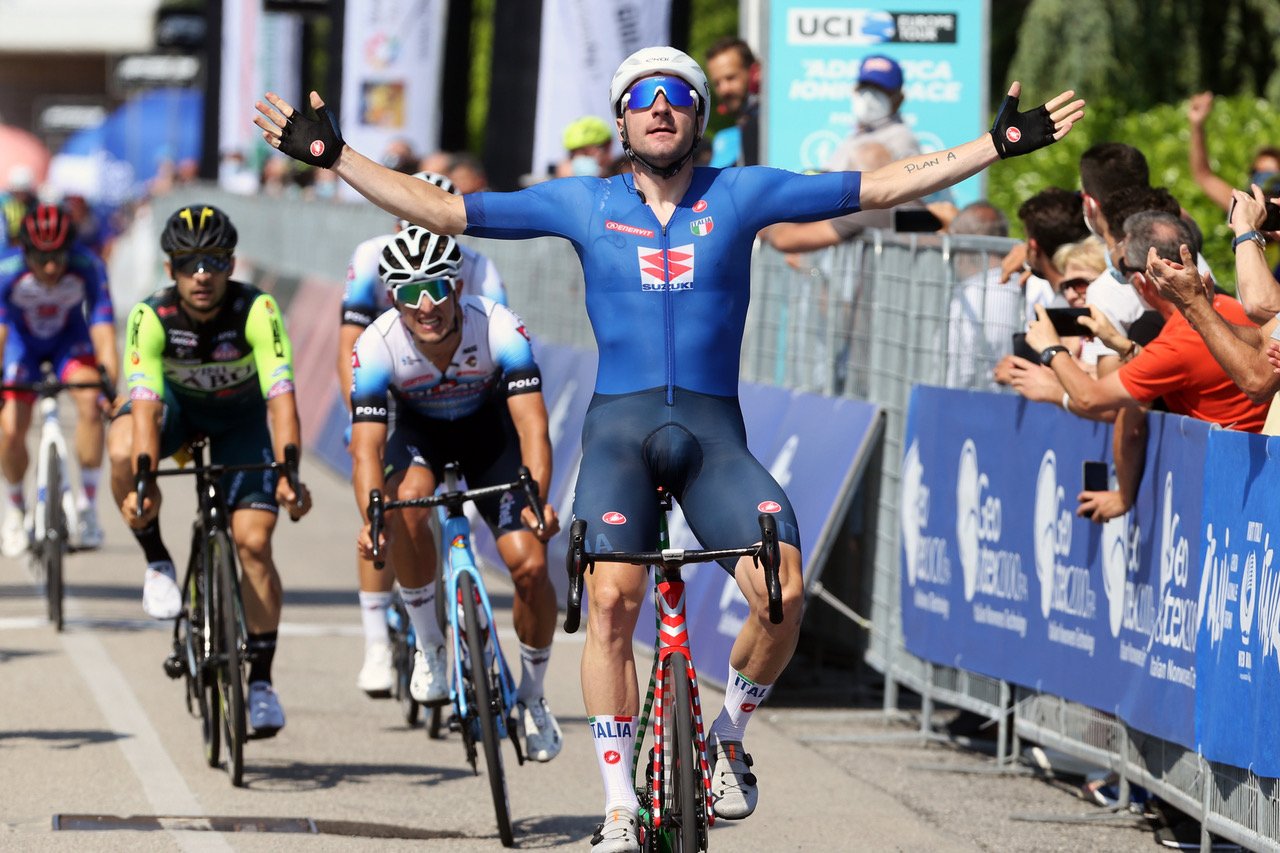 The first stage of Adriatica Ionica Race, the stage race conceived and promoted by Moreno Argentin with the support of Friuli Venezia Giulia, Veneto and Emilia Romagna regions, together with ENIT, National Tourism Agency along the routes of the Serenissima, crowned Elia Viviani (Italian National Team).

Elia Viviani, aged 32, Veronese from Vallese di Oppeano (VR), he has won today his 80th victory, wearing the Italian Team jersey, achieving the first podium position at the end of a fast, intense and spectacular.

RACE DETAILS – The third edition of Adriatica Ionica Race has officially started this morning at 11.30 for 110 athletes in the beautiful frame of Piazza Unità d’Italia in the heart of Trieste. After just few kilometres, four riders left the group: Diego Pablo Sevilla of Eolo-Kometa, Luca Rastelli of Colpack, Matteo Donegà of CTF and Davide Cattelan of Zalf.
Winner of the first and unique GPM of the day of San Michele del Carso is the Spanish Sevilla (Eolo-Kometa).

Winner of the cash sprint in Moruzzo is Davide Cattelan.

The fugitives reached a maximum advantage of five minutes, then the group mainly led by Italian National Team and Vini Zabù, considerably reduced the advantage.

Four leaders entered the last lap in Aviano, with just 57 seconds of advantage on the group. Matteo Donegà (CTF) was the winner of the second cash sprint of the day.

The fugitives were definitively reabsorbed by the group when 3 kilometres were left. The train of the Italian National Team took over the reins of the race: at less than 200 meters, Davide Cimolai launched Elia Viviani who easily beat Persico and Pacioni, rounding out the podium on Stage 1.

INTERVIEWS – A smiling Elia Viviani, is ready for the interview: “I came to this race to be ready for the Tokyo Olympics and to be successful again. Today I felt myself at home: I knew the roads well and everything went in the proper way. All my teammates were fantastic: even if we met only yesterday, they made a perfect action for me. The Italian National Team jersey has given us the right motivation and the result has completely satisfied us. This success allow the World Champion to look positively to Tokyo. I want to try again this experience on the Ferrara – Comacchio stage, Giro di Sardegna and Tokyo. My feelings are great, it was the same at Giro d’Italia, but I missed the win that finally arrived today”.

Davide Persico, aged 20, is also happy, talking about his today’s success: thanks to this achievement, he wears the white jersey. “Having the opportunity of sprinting with such a great Champion as Elia, it has been an incredible experience for me and I hope this second position brings me good luck”.

Satisfied with the first stage, Moreno Argentin added: ”Coming back after two years from 2019 edition and after the forced cessations due to Covid-19 pandemic, it was not easy, but we were ready and the result was a beautiful and emotional stage, both on technical and environmental point of views. Tomorrow the stage will be even more spectacular and significant: we will tackle it counting on professional organisation and full of the emotions got from the first stage”.

THE WINNER PROFILE
Elia Viviani, 32, Veronese comes from Vallese di Oppeano. Professional rider since 2010, he has won today his 80th victory and his 5th personal achievement in the Adriatica Ionica Race. In 2016 he became Olympic Champion in the Omnium, at Rio de Janeiro Olympics; in 2019 he won the title of European Road Champion in Alkmaar (Holland). It also obtained two silver and a bronze medals in the track World Championship.

CLASSIFICATIONS:
The first finish of the AIR 2021 has also affected the other special classifications: