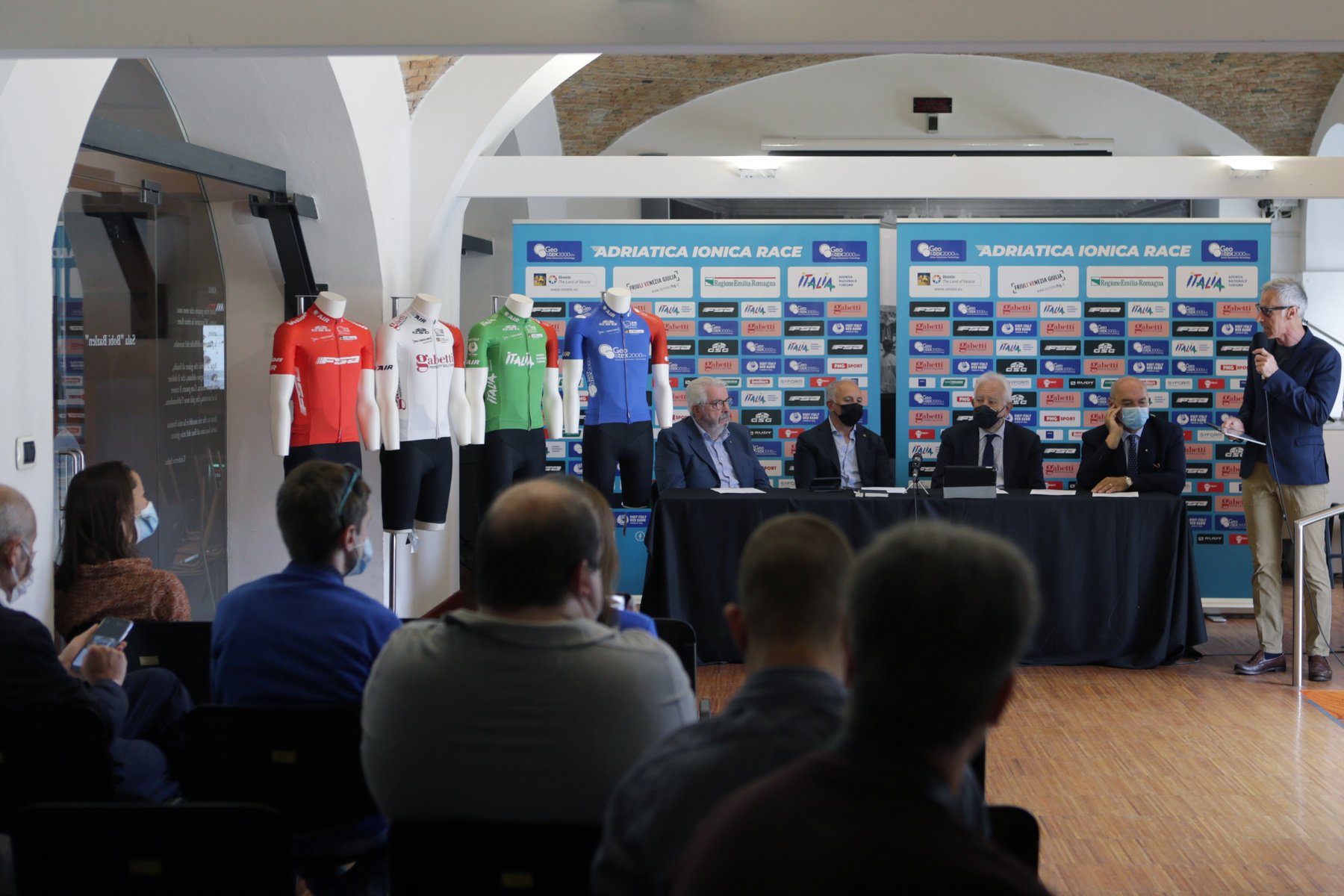 The 2021 edition of the Adriatica Ionica Race was launched this morning with a virtual presentation in the heart of Trieste. The stage race for professional riders, taking place from 15th to 17th June, will have the support of Friuli Venezia Giulia, Veneto and Emilia Romagna and of Enit – National Tourism Agency.

The event presentation was held in the Bobi Bazlen room of Palazzo Gopcevich where the World Champion Moreno Argentin has done the honors with the mayor of Trieste Roberto Di Piazza and the council member for sport Giorgio Rossi.

“Even with a reduced formula due to the remarkable uncertainty connected to the Covid-19 pandemic, we wanted to be faithful to the philosophy that has always distinguished us” – anticipated Moreno Argentin. “This is the reason why the three stages are three precious pearls within which we have included not only the relevant technical contents, but also all the excellences that characterize the territories we are going to cross. The opening stage will be connected with the water topic and will allow us to experience an unpredictable final, where any result is possible. The start from Vittorio Veneto and the finish atop Monte Grappa, after crossing the Prosecco Hills, will be a tribute to the history of our Country and, at the same time, the enhancement of the territories crossed, under the banner of environmental awareness.  Finally, the third and last stage will start from Ferrara, rich in culture and history and will offer spectacular stretches on the Emilian dirt roads to end in Comacchio, the Little Venice. Three wonderful days of competition will allow many Italian riders to better prepare for the appointment with the Italian Championship in Imola and the fans will appreciate some of the most beautiful places in our Country”.

“Initiatives like this are worthy of our attention and all our support because through a popular discipline such as cycling, they allow us to focus on our territories and their excellences” – underlined the Undersecretary of the Ministry of Agricultural, Food and Forestry Policies, Gian Marco Centinaio. “Every corner of our Country can give different emotions and feelings and the bicycle is becoming the ideal way to discover and appreciate them. I would like to express my personal wishes for the success of this third edition of Adriatica Ionica Race, hoping that it could become even more important and attractive for the international public”.

Four raffled off jerseys, made by GSG, unveiled in the presence of the number one of the Italian Cycling Federation, Cordiano Dagnoni and the Italian National Team coach Davide Cassani: the blue jersey branded Geo&Tex2000 will identify the general classification leader, the green jersey awarded to climbers will be sponsored by ENIT, the white jersey of Gabetti Group for youth classification and the red jersey branded Full Speed Ahead for the sprinters.

“Friuli is happy to welcome the start of the third edition of Adriatica Ionica Race: a competition that has ended twice on our roads and has always given great visibility to our territory” – wrote in his greeting message Massimiliano Fedriga, President of Friuli Venezia Giulia.

“Veneto is by definition the land of cycling. Here cycling is part of popular culture and represents a great driving force not only for associative purposes but also for the entire tourism sector that is increasingly moving towards the bicycle. Finishing line atop Cima Grappa will be a great opportunity not only for the strongest climbers, but also for those following the race to remember and honour who fought for freedom of our country” – added Francesco Calzavara, Council member for Planning and Financial reports of Veneto.

“We are the new entry in this event and we are happy to be for the first time part of sporting race so important. The final stage Ferrara – Comacchio is a great opportunity for our territory to promote our beauties, for example, Delta del Po and Valli di Comacchio Regional Park that will be the background to the great finale of the race” – underlined Stefano Bonaccini, President of Emilia Romagna.

“Enit could not miss an event starting from Miramare Marine Protected Area, passing through Colline del Prosecco included in the Unesco World Heritage Site, arriving to the future Monte Grappa Biosphere Reserve and ending at Natural Park Delta del Po. The tourism of the future is greener and increasingly linked to cycling. This is the added value which joins us to Adriatica Ionica Race and make us proud to be part of it – added the Executive Director of Enit, Giovanni Bastianelli.

Together with the regional presidents, all the mayors of the stages involved clapped their hands to Moreno Argentin and his staff: Ilario De Marco Zompit mayor of Aviano, Antonio Miatto mayor of Vittorio Veneto, Annalisa Rampin of Pieve del Grappa, Alan Fabbri of Ferrara and Pierluigi Negri mayor of Comacchio.

Patron Renato Campana, owner of Geo&Tex2000, main sponsor of the event, was also satisfied with the race program. “With Moreno Argentin there has always been a great understanding and we are happy to be part of this competition attracting a great interest from teams and fans. Our passion will lead us to be partners of this event also in the future, hoping it can grow further”.

A competition that promises to be spectacular: 16 formations made up of 7 athletes each, encouraged by three World Champions: Gianni Bugno, Mario Cipollini and Alessandro Ballan.

The Champion of Varese 2008, Alessandro Ballan, went into details of the challenge: “It is a real race that will offer top-level technical contents such as the climb leading to Cima Grappa. Whoever wins on these roads will have the physical condition and the right qualities to be protagonist also in other big summer events”.

PMG Sport will take care of the television production of the event and will guarantee exceptional coverage with broadcasting of the summary of each stage on RaiSport and Eurosport, reaching more than 150 countries around the world. PMG Sport will show images of Adriatica Ionica Race 2021 also on its social channels and on the other network headlines, as mentioned by Roberto Ruini.